The primary goal of the project is to synthesize and advance the knowledge of the settlement processes taking place in the upper Posočje region from the Iron to the Middle Ages. By evaluating small finds and data on archaeological sites, also through spatial analyses, we observe the continuity and changes of the settlement patterns during the 1st millennium BC and the 1st millennium AD. The intention is to study the nature of the lowland and highland settlement, the economic potential and subsistence strategies. Special attention is paid to the communications and the role of the region in the wider network of connections between the Alpine regions of Central Europe and the North Adriatic hinterland. As yet unpublished finds (Gradič near Kobarid, highland sites) are also be processed, which help reduce the current lag in publishing the results of the archaeological investigations in the region. 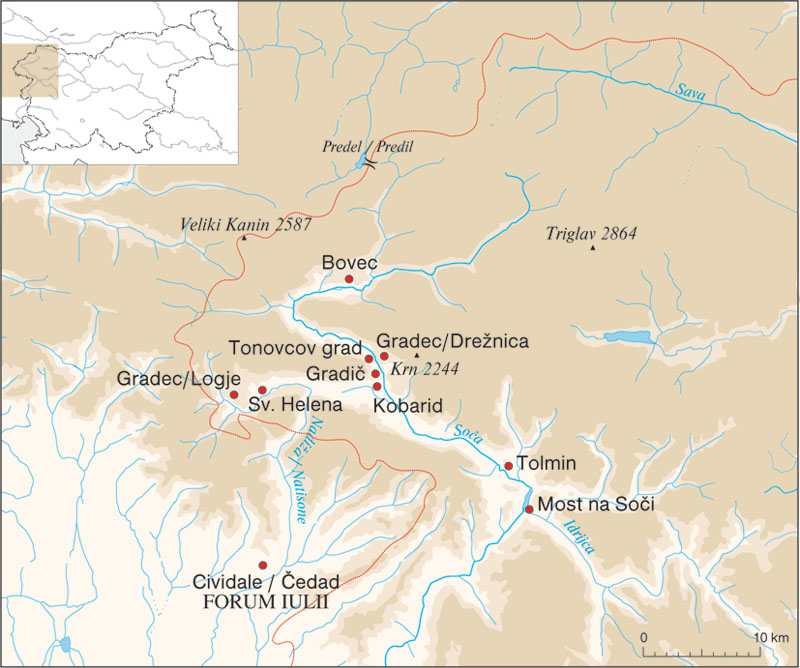 Objective of the proposed research

The Posočje region with its geographical position between the Alps and the Mediterranean offers great potential for investigating the relationship between man and nature in the past. Due to specific (sometimes extreme) natural conditions, large altitudinal differences between archaeological sites, differences in climate and poorly passable terrain, it is a great challenge for settlement studies and for testing modern field survey methods (Lidar, GIS analyses). Some sites in the region have already been the subject of more in-depth scientific studies (Most na Soči, Tonovcov grad near Kobarid), whereas others, even those where substantial excavations have taken place, still await evaluation and publication. The relationships between individual archaeological sites and their natural environment have also not yet been fully explored. Human habitations generally concentrated in small basins at valley junctions (Most na Soči, Tolmin, Kobarid and Bovec). In troubled times, the population moved to more remote, higher locations. A particular phenomenon is the exploitation of the highlands, where human presence has been recorded from the Mesolithic era onwards.

The main objective of the project is to improve the knowledge of the settlement dynamics in the upper Posočje region from the first permanent habitations in the Early Iron Age up to the Early Middle Ages.

With the help of the collected and evaluated data on the known archaeological sites and in relation to their geographical location and natural environment, the dynamics and main features of settlement are examined according to archaeological periods. Select small areas in the valleys, where the living conditions are most favourable (Most na Soči, Tolmin, Kobarid and Bovec), are investigated in more detail in order to explore the economic potential and subsistence strategies that include the exploitation of the highlands.

2. Analysing the development, social structure and ritual practices of the Early Iron Age community living in the Posočje region.

The large cemeteries unearthed at Kobarid, Tolmin and the largest one at Most na Soči, as well as the graves in the Bovec area show that the region was particularly intensively and permanently inhabited in the Early Iron Age. Less is known of contemporary settlements with the exception of Most na Soči that functioned as the regional centre at the junction of the Venetic and Hallstatt cultures. In the 6th century BC, the Posočje community colonized the hilly hinterland as far as Bohinj in the Gorenjska region.

The cultural phenomenon of the Late Iron Age is also known almost exclusively from necropoleis; they occur in more remote valleys, to which the majority of the population settled. Most known burials date to the 1st century BC. The grave goods reveal a combination of regional North Adriatic components and central European Celtic elements. There are also inscriptions in the Venetic script, which point to contacts with the Venetic area.

Research involves detailed chronological, statistical and spatial analyses of the representative cemetery at Most na Soči focusing on the development, social structure and specifics of the ritual practices of Posočje’s Early Iron Age community. More than 6000 graves of this cemetery were investigated, spanning five hundred years (8th to 3rd century BC). We also examine its relation to the nearby Tolmin, a site that represents the formative phase of the community, the relationships between the regional centre at Most na Soči and other lowland and highland sites, as well as the changes that took place at the transition to the Late Iron Age.

3. Determining the significance of Kobarid and the sanctuary at Gradič.

In the Roman period, the Posočje region belonged in administrative terms to the territory of either Forum Iulii to the southwest or Emona to the northeast. One of the central settlements was at Gradič near Kobarid, which has not yet been systematically investigated. It appears to have been continuously inhabited from the Early Iron Age to the Roman period. The cult place near the settlement was in use from the end of the Early Iron Age to the 4th century AD. The tombstones from Most na Soči dating to the second half of the 1st century BC at the latest indicate very early immigration of veterans and other arrivals from Italy. The specific funerary ritual (biritual burials, weapons and tools offered as grave goods), on the other hand, shows the predominance of autochthonous population at least at the beginning of the Roman period. Another important settlement core was in Bovec, on route towards the Predel Pass. This route was used intensively in the 2nd and 1st centuries BC, while its importance seems to have diminished after the construction of an easier, albeit longer, route via Kanal/Canal del Ferro.

One of the aims of the project is to determine the chronological phases and continuity of settlement in Gradič, the role of its sanctuary within the region and its occasional supra-regional significance, the nature of the cult and the development of the ritual. We want to verify the assumptions about the cult of local importance in the Early Iron Age (from the end of the Early Iron Age onwards), its transformation into a supra-regional religious centre in the 1st century BC and, in the Imperial period, again into a local cult. Artefacts of distant provenance reflect connections with the Veneti and Italy, on one side, and with the Norican Kingdom (later province of Noricum), on the other.

4. Studying the settlement pattern changes in Late Antiquity and detailed investigations of the area around the central settlement at Tonovcov grad near Kobarid.

The period of the Roman Empire in decline is best reflected in the change of the settlement pattern, with a marked shift towards fortified hilltop settlements. In this time, the prehistoric route along the valleys of the Rivers Nadiža/Natisone and Soča/Isonzo, and over the Predel Pass to Noricum as an important access route to Italy again became important.

The first more intensive settlement of high-altitude, more easily defendable locations dates to the second half of the 4th century AD, when settlements in the valleys were still alive; they were abandoned after the mid-5th century AD. However, the manner and precise chronology of moving from predominantly lowland Roman settlements to higher locations and re-moving again to the lowland in the Early Middle Ages are not completely clear.

The fortified settlement researched best is that at Tonovcov grad near Kobarid. In its first phase (second half of the 4th / first half of the 5th century), it controlled the road along the Soča valley and presumably hosted a small military garrison.

In the second phase (toward the end of the 5th and in the 6th century AD), the settlement with three Early Christian churches functioned as the religious and also administrative centre of a larger area. However, the relationship of Tonovcov grad to other altitude outposts (Gradec near Logje, Gradec near Drežnica, Sveta Helena) is not completely clear, neither their function nor the communications between them. Also unknown are the cemeteries.

The aim of the project is to locate the necropolis associated with the settlement at Tonovcov grad and to detect the remains of possible craft activities (e.g. iron and pottery kilns) in the extra muros area by using non-destructive field surveying methods. The research also examines the relationship between the religious and administrative centre at Tonovcov grad and the settlements at its periphery.

The end of the Late Antique settlement in the Posočje region came sometime in the mid-7th century AD. After that, the situation is unclear for almost two centuries. The scant early medieval evidence consists of a grave dug into the ruins of a Late Antique church at Tonovcov grad, as well as several graves and stray finds in its vicinity. Archaeologists have also unearthed several churchyard cemeteries from the 9th and 10th centuries AD (e.g. Sv. Urh in Tolmin), but so far no traces of the associated settlements.

By analysing the early medieval remains, we try to enhance the knowledge of the settlement in the upper Posočje region in the post-Roman era.

5. Studying the characteristics of the highland sites, the economic reasons for the human presence there and the adaptation to the extreme living conditions.

From the Bronze Age on, high mountains are associated with transhumance. Traces of habitation and surface mining indicate that iron ore began to be exploited in the Iron Age. The number of archaeological sites notably increased in the Roman period, which shows an intensified economic exploitation of the highlands. Pottery from the Early Middle Ages suggests continuous exploitation. However, the beginnings of shepherd economy proper (Middle Ages or earlier) remain an open question.

Research focuses on the intensity of highland exploitation in individual periods, the character of the sites, the transition to shepherd economy and the role of mining.

We apply modern methods for detecting archaeological marks in the landscape, such as remote sensing (Lidar) and geophysical prospections, as well as GIS tools for spatial studies, using own data and the data obtained from public sources. New and improved data are entered into the online database of the archaeological sites of Slovenia (ARKAS).

The intention is to publish a scientific monograph on the cult place in Gradič near Kobarid and other results of the project in scientific media, thus contributing to a better knowledge of the region on both the local and international levels.

The project is carried out in phases and individual work packages. Specialists from two research and education organizations collaborate, performing the research either independently or jointly.

2. Department of Archaeology, Faculty of Arts, University in Ljubljana