Palynologists study fossil pollen grains deposited in lake and marsh sediments. The results of our research are used to reconstruct long-term changes in vegetation and to examine how vegetation and the environment have been altered by humans and climate variability.

Our research is multidisciplinary, with extensive international collaboration. Changes in Lateglacial and Holocene vegetation in Slovenia during different archaeological periods are studied in the regions of Ljubljansko barje, Julian Alps and Bela krajina in Slovenia.

Ljubljansko barje is one of the few ‘long sequences’ in Europe where thick layers of Pleistocene sediments were deposited over several 100 000 years. Pollen in the waterlogged sediments is also excellently preserved in much younger periods, e.g. in the Neolithic, when the area was inhabited by pile-dwelling settlements. By analysing fossil pollen in sediment cores and stratigraphic columns from archaeological sites, we can reconstruct the composition of forests, openness of the landscape and the influence of humans (forest clearance and burning) due to agriculture and livestock breeding.

At the end of the last Ice Age predominantly pine-birch forests grew around the former lake at Ljubljansko barje. At the beginning of the Holocene, about 11, 700 years ago, the climate became warmer and wetter and the lake was surrounded by mixed, predominantly deciduous forests of oak, elm, linden, ash and hazel. Beech forests spread early in the Holocene, while fir-beech forests began to dominate about 9000 years ago, probably due to the wetter climate. By about 6750-6000 BP the climate probably became somewhat drier, the lake shallower and the beech-fir forests retreated. Beech and fir then spread again, probably due to a wetter and colder climate. Human influence (forest clearing) became significant in the 4th millennium BC, when the area was settled by numerous Neolithic pile-dwelling settlements.

The Neolithic inhabitants of Ljubljansko barje, who needed open land for agriculture cleared and burned forests to create fields and pastures. This changed the composition of forests: shade-tolerant beech and fir became rarer, while hazel, oak and hornbeam became more widespread. Oak wood was also used for the construction of houses. Plant macrofossils and pollen of cultivated plants (e. g. cereals and flax) have been discovered in archaeological cultural layers of pile-dwelling settlements dated to the 4th millennium BC.

In the 18th and 19th centuries AD peat was cut and burnt at Ljubljansko barje to drain the area. In this way, the palaeoecological records in the younger layers of the Holocene (i.e. the last 4500 years) were destroyed in most of Ljubljansko barje. Therefore, information on vegetation history in the last millennia is preserved only in a few places e.g. Podpeško jezero, Mali plac and Jurčevo šotišče.

Golyeva A., Andrič M. 2014. Palaeoecological reconstruction of wetlands and Eneolithic land use in Ljubljansko barje (Slovenia) based on biomorphic and pollen analysis, Catena 112, 38-47.

Palaeoecological studies of sediments deposited in the Lake Bled towards the end of the last Ice Age enabled the reconstruction of vegetation and climate between ca. 20 000–10 000 cal. BP. Thin layers of microscopic volcanic ash derived from Italian and Icelandic volcanoes were also discovered.

In 2012, a 12 m deep sediment core was sampled from Lake Bohinj. In the upper 4.5 m of the core, a multidisciplinary international team of researchers examined an approximately 6600-year record of geological processes and human influence on vegetation. Pollen, sedimentological and geochemical characteristics of the sediment indicate that vegetation and sediment composition were influenced by climatic fluctuations. Layers rich in flysch material formed during the periods of wetter climate, when water came to Lake Bohinj not only from the west (Savica, current situation), but also from the eastern part of the watershed. Seismic events (a very strong earthquake was recorded around 6600 yr cal. BP!) reworked the previously deposited sediment, so that the earthquake history of the last 6600 years could be reconstructed. The first traces of human influence on forest composition were discovered in the Bronze Age when fir declined due to grazing. In the Iron Age around 2600 yr. cal. BP (600 yr. cal. BC), people cut/burned the forest, which led to massive soil erosion in the wetter climate. In the following centuries, the watershed stabilised. Human impact on vegetation continued, especially between AD 1580-1880, when due to charcoal production only 0.7% of beech pollen deposited in the lake.

The uplands of Julian Alps are palynologically largely unexplored and we do not know what impact humans have had on the environment and what natural resources have been exploited. Two sediment cores were collected in the lakes ‘Jezero na Planini pri jezeru’ (Late Glacial and entire Holocene) and ‘jezero v Ledvicah’ (last 6000 years). The palynological, geochemical and mineralogical study of these cores aims at investigating the impact of climate variability and human activities on the mountain environment. 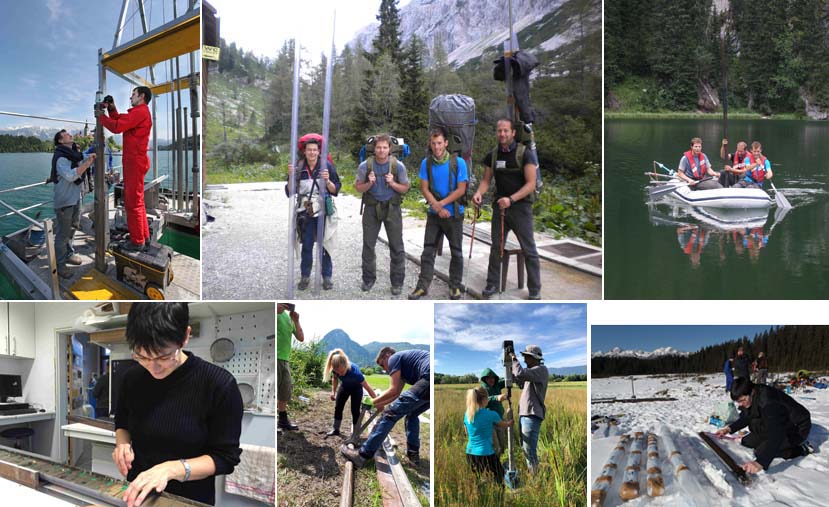 The vegetation of Bela Krajina has been significantly influenced by humans. Palynological investigations of two small marshes near the villages of Mali Nerajac (Mlaka) and Griblje showed that at the beginning of the Holocene a mixed forest of lime, hazel, oak, birch and pine grew in the region. At c. 8900 yr. cal. BP the climate probably became wetter and a dense forest consisting mainly of, beech spread. By 7800 yr. cal. BP beech was less widespread, but it is not clear whether this change in vegetation was related to the drier climate or to human influence. In the following centuries the forest recovered through phases of hazel, oak and hornbeam woodland.

The influence of the first, Neolithic farmers was felt at least from about 6000 yr. cal. BP. People burned the hornbeam forest around 5800 yr. cal. BP and the first pollen of cereals and plants characteristic of pastures, fields and ruderal areas (e.g. ribwort plantain, cornflower, mugwort, goosefoot) appear on pollen diagrams. In the following centuries, the beech forest recovered, but there were always phases of more or less intensive forest clearance and burning. This led to the formation of a mosaic landscape with increased species diversity. In the Bronze Age and Iron Age the proportion of fir increased, probably due to the wetter climate. In the Middle Ages (AD 1000), human pressure on the vegetation around Mlaka increased: the forest was cleared and an open landscape was created, similar to today.

The results of this study suggest that man has significantly influenced the vegetation of Bela Krajina during the last 6000 years. During the Holocene, beech (and fir) forests were more widespread than today, but deforestation/fire clearing created a mosaic landscape with increased biotic diversity. Today, the region is dominated by scattered birch and bracken forests, as well as oak and hornbeam forests.