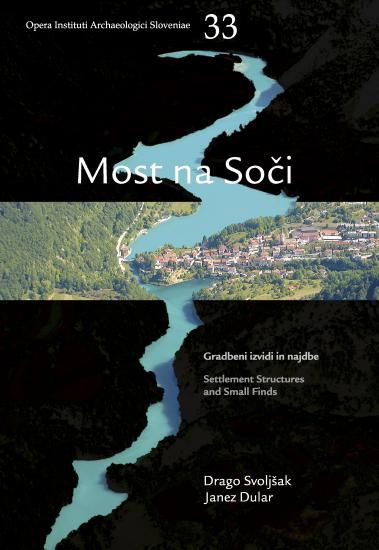 
Most na Soči ranks among the most prominent prehistoric sites in Europe. It is mainly known for the extensive cemetery from the Early Iron Age, which was first investigated in the late 19th century and revealed over 6000 burials. The rapid growth of the modern village of Most na Soči again led to large-scale archaeological excavations in the 1970s. These were conducted in the span of eleven years and unearthed one of the most significant Iron Age settlements in Slovenia and the wider south-eastern Alpine region.

The monographic publication on this settlement begins with a geographic outline of the site and its surroundings, which is followed by a detailed history of research complete with a list of contributions and reports on the subject published thus far.
The main part of the book is dedicated to presenting the settlement structures that include thirty-six houses excavated in the eastern part of the modern village. It is the most comprehensive publication of an Iron Age settlement to date in Slovenia, which offers new insights into the living conditions of the Iron Age population inhabiting the area of Caput Adriae or the south-eastern Alps. The multitude of data gained from the excavations enabled a reconstruction of the settlement’s plan and provided an understanding of the construction methods and numerous technical details, revealing how drainage walls, dividing walls and foundations were built, and also revealing the appearance of the floors, wooden wall constructions, drainage ditches and pits used in different production processes (for instance metallurgy, pottery). The text is illustrated with 229 plans and photos that complement the detailed descriptions of the structures.
The book concludes with the illustrations of small finds recovered in the houses, presented on a hundred plates. These predominantly consist of pottery sherds, but also include numerous stone, bone and metal items. Those of metal are particularly important because they are chronologically diagnostic and allow the archaeologists to precisely date individual houses and their phases, but also reveal the remarkable technical skills that the craftsmen of the day possessed.