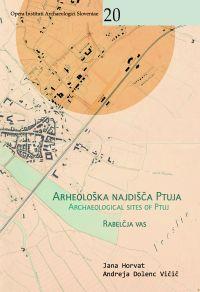 
The region of Ptuj lies on one of the central traffic axes within the broader margins of the Eastern Alps, and already in the distant past represented an important settlement centre. This monograph incorporates the knowledge hitherto gained abouth settlement history, from the Eneolithic to the Early Middle Ages in the eastern area of Ptuj, in Rabelčja vas. The emphasis is on the Roman Period, when the eastern district of the Roman town of Poetovio was beginning to spread here.
Within the area of Rabelčja vas, which comprises nearly one-third of the Roman town of Poetovio, over a period of two centuries more than 160 discoveries and researches have taken place. During the past four decades, extensive rescue excavations have been carried out here, which have revealed numerous prehistorical remains, and also the eastern, crafts quarter of the ancient town, together with the main road and extensive burial sites.

In the book, the archaeological sites are presented in the form of a catalogue and entered onto a survey map in the dimensions of 1: 2500 and 1: 5000, and onto detailed maps of larger dimensions. The catalogue is divided according to larger time periods into Prehistorical, Roman, Early Medieval and Late Medieval-Early Modern period sections. Great care has also been invested into the precise and substantiated positioning on the maps, and also to the interlinking of the sites with references in the literature. A brief presentation is given of the course of the research works, a description of the remains and the datings, which are consistently based on the already published data. In the concluding chapter, a presentation is given of the development of the settlement in the area of Rabelčja vas and within the space of the entire town of Ptuj, from the Eneolithic to the Early Middle Ages.
The complete text of the book is in Slovene, with the introductory and concluding chapters translated into English.

Arheološka najdišča Ptuja. Panorama / Archaeological sites of Ptuj. Panorama was published as Volum 41 in the series.