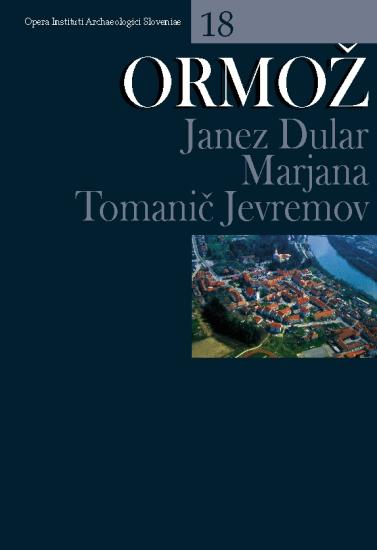 
Ormož ranks among the most important archaeological sites in Slovenia. The fortified settlement from the Late Bronze and Early Iron Age extended over the area where the town stands today. It developed on a high-lying terrace on the left bank of the river Drava, which forms a broad bend right at the foothills. This site was intentionally selected, since towards the river it was protected by a steep slope, and to the east and west by relatively deep natural dykes. In the present monograph a survey is given of the results of the excavations which were carried out in Ormož during the period from 1974 to 1981.

First, the fortification system is presented, particularly the massive rampart, which protected the settlement on the north side. Then follows a description of the structures in the interior, among which mention should be made particularly of the hearths, fireplaces, wells and storage pits, around which life revolved in prehistory.
A separate chapter is devoted to dealing with the animal bone material, which enables one to gain an insight into the nutritional habits of the people of that time.
Of great importance is also the reconstruction of the buildings, for which it has been established that they were without exception constructed by earthfast posts, i.e. using a building technique which in the Late Bronze Age was customary also in other regions of Central Europe. Then follows a reconstruction of the ground plan of the settlement which, despite certain constant features, such as the positioning and orientation of the buildings, does not reflect any clearly delineated functional and social differences. This was to be expected, since in the Late Bronze Age society was also arranged on more or less egalitarian lines.
The second part of the monograph comprises the catalogue of material, which is presented in 171 plates.