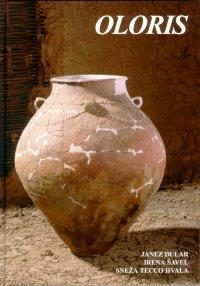 
Archaeological sites whose importance extends beyond a Slovenian framework undoubtedly include the Bronze Age settlement of Oloris near Doljni Lakoš. The site was excavated in the eighties by staff of the Regional Museum in Murska Sobota and members of the Institute of Archaeology, ZRC SAZU, from Ljubljana.

The first part of the publication presents the settlement, which was located in one of the bends of the Črnec stream. It was surrounded by a wooden palisade, for which oak was mostly used. The greatest settlement density was discovered inside the settlement in two gently raised sections. All that was preserved of the former dwellings were traces of holes for the vertical beams and parts of the demolished walls. In the southern part of Oloris, where a larger area was excavated, it can be seen from the plan that the houses stood closely together, with narrow passages between them. This was a crowded arrangement of dwellings around a courtyard area, where everyday life took place. Four ovens were discovered in the courtyard among the buildings. The settlement at Dolnji Lakoš was inhabited in the late 14th and in the 13th century BC, and remains the only systematically excavated settlement of that period in Slovenia.
The second part of the monograph deals with the place of this site in the framework of Bronze Age culture. The typology of the material is presented, with a chronological classification of the finds, as well as comparative analyses to related sites.
A synthetic overview is further offered of the late Bronze Age between the Mura and Sava Rivers (Slovenia, southwestern Hungary, Croatia, and northern Bosnia).

price
not for sale