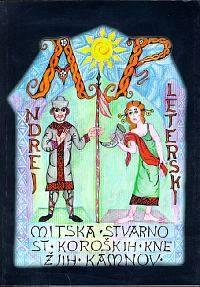 
A booklet Mitska stvarnost koroških knežjih kamnov (Mythical Reality of the Carinthian Dukes' Stones) deals with the ritual of enthroning Carantanian dukes from the aspects of archaeology and mythology. The ritual is not rooted in some putative ancient Slovene proto-democratic community, but stems rather from pre-Christian religion such as was common at least in the period of the early Indo-European community. The essential components of the ritual are a duel and marriage to the goddess of Authority in equine form, which would ensure the well-being of the human community. The author establishes that the ducal throne in Zollfeld-Sveško polje (Austria) dates in its present form only from 1335. Up to that time the site was occupied by the Princely Stone also, which was then carried off to Karnburg-Krnski Grad. Originally there were four stones in Zollfeld-Sveško polje. In the same way, four stones were originally involved in the enthroning ritual in Temair (Eng. Tara) in Ireland. As a sacred tribal community, Carantania was small. Alongside it lay the Slav principality of Liburnia, with its centre at Lake Millstatt. Here at the end of the 8th century lived Prince Domicijan, a patron and supporter of clerical communities in Molzbichl and Millstatt, where writing was started on the oldest Slavic texts which we have come to know in the later form as the Freising Manuscripts.