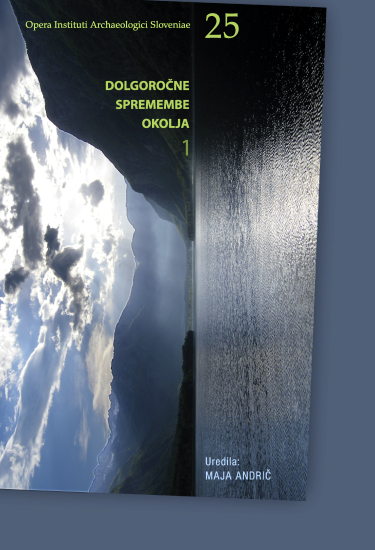 
Changes of past and present environment of Slovenia are discussed in nine papers, which were written by 21 authors, coming from 14 research organisations. Our aim is to increase multidisciplinary communication and cooperation between Slovenian researchers, working in the fields of palaeoecology and ecology. Research topics include: archaeozoology, biology, ecology, geoarchaeology, palynology, nature protection, dendrochronology, archaeobotany, geochemistry, Karst research and geography.

The first paper, written by Borut Toškan draws attention to the importance of taphonomic processes shaping archaeozoological palaeoenvironmental record. The author demonstrates how the feeding habits of owls and other processes at archaeological site significantly affect deposition of bones of small mammals. These were used to reconstruct the environment in the vicinity of archaeological sites at Ljubljansko barje. Algae are also a good indicator of past and present environment. Aleksandra Krivograd Klemenčič presents the results of floristic research of algae in selected bogs of Slovenia, illustrating huge algae variability and vulnerability of their habitats. In Divača Karst, which is archaeologically very interesting region, there are no marshes, suitable for palaeoecological research. Nevertheless, paper written by Tomaž Fabec reveals that dolines are very valuable source of pedological and geoarchaeological data, which helps us to reconstruct human impact on the environment. Human impact on biotic diversity was important also in Bela krajina, where a comparison of phytocoenological and palynological research, carried out by Urban Šilc and Maja Andrič, demonstrates that extensive disturbance throughout longer time periods affects biotic diversity in the landscape. Dendrochronological research is well known among archaeologists, interested in precise dating of archaeological sites. The paper written by Tom Levanič presents interesting, but among archaeoelogists less well known discipline of dendrochronology, the reconstruction of past environment and climate. The sixth paper, written by Igor Pavšič, Sonja Škornik and Mitja Kaligarič, presents the remains of seeds which were discovered from the walls of more than 100 years old cob cottage from Lendavske gorice. These were used to reconstruct the biotic diversity of weed associations, growing in past cultural landscape. Nives Ogrinc, Stefano Covelli, Bojan Ogorelec, Jadran Faganeli and Mihael Budja used geochemical analysis and radiocarbon dating of four sedimentary cores from Trieste Bay to reconstruct the Holocene palaeoenvironment. The results suggest that, during the Würm regression, Trieste Bay was fluvio-lacustrine plain with rivers and marshes. The analysis of stable isotopes was used to reconstruct past sea water level fluctuations. In the eighth chapter the results of palaeomagnetic and magnetostratigraphic research in karst caves are presented by Nadja Zupan Hajna, Andrej Mihevc, Petr Pruner and Pavel Bosák. These results suggest that many caves are presumably much older than suggested earlier (Pleistocene and Holocene); the oldest sediment is probably of Miocene age. The contribution of Matej Gabrovec, Blaž Komac and Matija Zorn, demonstrates that cadastrial archives are very important source of information for studies of past geomorphological processes. The authors used the data about landuse in the last two centuries to model erosion processes in Zgornje Posočje.
Site Long-term environmental changes