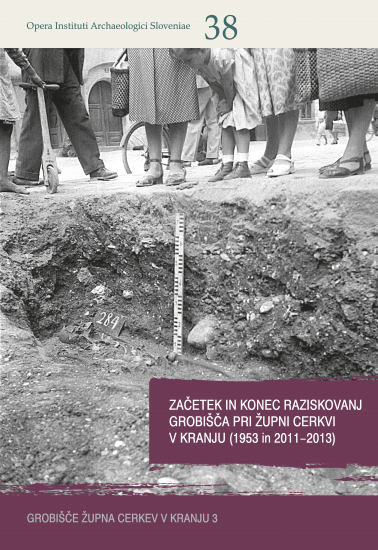 
It was in the spring of 1953 when digging pits to plant trees in front of the Prešeren’s Theatre in Kranj revealed some graves. Extensive excavations followed, led by Jože Kastelic and Vinko Šribar from the National Museum. 308 graves were excavated: 15 were recognised as the so-called (later) “Baroque” graves and 293 as “Ketlach”, that is Early Medieval ones. The finds were first stored in the National Museum in Ljubljana, and later moved to the Gorenjski museum in Kranj, while all the documentation remained in Ljubljana.

The excavations of the extensive cemetery continued in 1964 and 1965, from 1969 to 1973, and in 1984. In the following decades, several graves were excavated in the course of various ground works. The graves found between 1964 and 2010 were published in two monographs in the series Opera Instituti Archaelogici Sloveniae (volumes 35 and 37).
From 2011 to 2013 there was a large archaeological excavation at the start of the complete renovation of public areas in the city centre. It was carried out by archaeological company PJP, d. o. o. 561 graves were dug under the leadership of Rafko Urankar.
The third book on the cemetery Župna cerkev in Kranj completes the entire corpus of data on objects, graves and the cemetery as a whole. During the sixty years of field research (1953-2013) all documentation techniques that prevailed in individual periods were used, which is an ideal test of their comparative advantages and disadvantages. The route from excavations to critical publication was extremely compound and could only be completed in a very complex digital environment with the help of a number of unique information solutions. Simultaneous publishing in analogue and digital form makes it possible to use the best of both media.
The three-part structure of the book introduces an overview of field documentation and its structure, and solves the problems that arise. The most extensive is the central part, which uniquely represents archaeological remains. The third part is cartographic and shows spatial distribution of individual graves.
The cemetery belonging to the medieval city is the largest published medieval cemetery in Europe. More than 1000 years (from the 8th century to the end of the 18th century) of continuous burial in the same place caused the accumulation of graves, resulting in over 10,000 stratigraphic relations. Complete information is now available for further typological, chronological, population and other studies. Sky (imagination) is the limit.
***
The pdf file in full resolution is available here (485,9 MB).