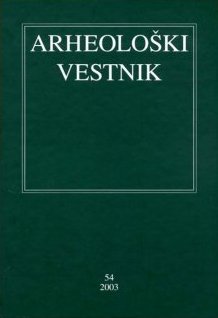 Arheološki vestnik is the central Slovenian archaeological journal. It is devoted to presenting the findings and discoveries in archaeology as well as other fields of scientific research that complement archaeology in shedding light on the past of the south-eastern Alpine, northern Adriatic and western Balkan regions with an emphasis on the territory of modern Slovenia and neighbouring countries. All articles are published with an abstract and a translation or a lengthy summary in either Slovenian or other languages. Individual issues are limited to roughly 350 pages. The journal is included into various bibliographical databases and indexes, also AHCI (Arts and Humanities Citation Index). Arheološki vestnik is annually sent for exchange to roughly 450 addresses both in Slovenia and abroad.